MiFID II Reference Data: Here’s what it all means

MiFID II is finally here and one of many things that came with it is some new reference data. In this blog post we intend to break down this data and have a look at what they actually mean.

For shares admitted to trading on regulated markets, a set of new data metrics has been made available.

The screenshot above displays a few new data points such as:

Orders meeting the minimum volume requirement stated (Large in Scale Volume) have the benefit of a pre trade transparency waiver. Meaning, orders above the volume threshold are allowed to be entered into a central lit order book for example as a non-displayed limit order (also known as hidden order). The size of the LIS Volume threshold is based off of the ESMA ADT values.

ESMA considers instruments to be either Liquid or non Liquid. This is a parameter which could be used by brokers to categorize their retail clients and instruments into the correct user suitability category.

SMS, Standard Market Size. This is an important threshold for firms conducting in house business such as a Systematic Internaliser. If an instrument is deemed Liquid by ESMA, all quotes in that instrument must be published externally. However, orders with size above the SMS do not need publish these quotes pre trade. So in the screenshot above we can see that any pre trade quote smaller than 10 000 shares must be made public onto for example a market data feed made visible in platforms such as Infront.

Daily Transactions. This datapoint displays average value for number of daily transactions in a instrument.

Average Daily Turnover, stated in the currency of which the instrument is trading in.

Average Value of Transactions. Average value of a trade in a given instrument, stated in the currency of which the instrument is trading in.

As you probably know by now. ESMA decided to delay the double volume cap mechanism stating that the current quality and completeness of the data does not allow for a sufficiently meaningful and comprehensive publication of double volume cap calculations.

However, The Infront is already ready to receive and publish this data within the two below data points, Capped & Venue Capped pct.

This field will show if either a specific venue as blocked that particular instrument for Dark Pool trading or if a EU FCA has decided to block dark pool trading.

MiFID II came with a standardized tick size scheme across all markets. It contains six liquidity bands which will define the minimum tick size for a given instrument. The Liquidity bands are based on the DT, Daily Transactions.

So going back to the screenshot above, where we see that DT is 7 071. Comparing that to the tick size table below it tells us that the tick size should be in Band 5, 2000 ≤ average daily number of transactions < 9000. This we can confirm, by checking the field Liquidity Band in the G4S screenshot above. 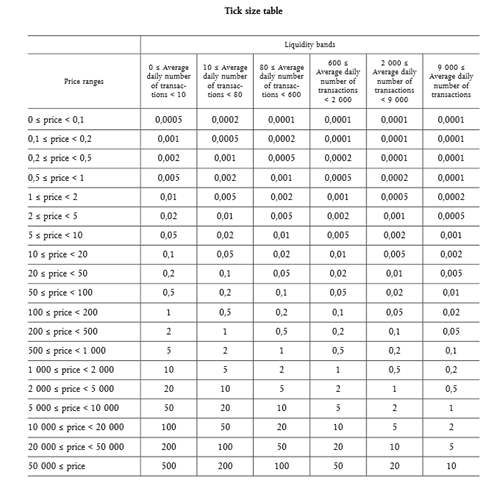