Friday, 24 May, 2019 by Meredith Sledd Lindquist
Valuations of European small cap-companies skyrocketed at the start of the year, which was in line with the general stock market trend, according to the Infront Eurozone Small Cap Valuation Index. This index consists of 1.118 companies in Europe with a median market cap of 82 million euro and computes their actual valuation (EV/EBITDA).

In the first quarter of 2019 the valuations rose to an index level of 8,6x, an increase of 8 percent compared to the fourth quarter 2018 level of 8,0x. A review of the different categories shows that the upper segment of the small capitalization, defined as having a market cap of 150-500 million euro, performed better, + 8 percent, than the smaller companies. This means that the valuation gap between the two categories closed and that both value at 8,6x EV/EBITDA.

For the Nordic companies, of which the majority (58%) are Swedish, the valuations during the beginning of the year reached earlier record levels at 11,8x EV/EBITDA, which is a full 35 percent above the European average. The top level, according to this index, was recorded during the third quarter of 2018 when the Nordic companies were valued at 12,3x.

The Nordic small-caps are dominated by three sectors: industry, healthcare/biotech and IT.

Among other geographical regions, the index also shows high valuations in Germany as it rose 11 percent to 9,6x during the first quarter, which is the highest level in the Eurozone.

Premium for unlisted is currently at 17% compared to listed companies

The valuations of small-cap companies can also be measured against those of unlisted, privately held companies. The pricing trend for unlisted companies has gone up for several years to reach a record level towards the end of last year and stabilizing during the first quarter 2019.

Unlisted companies in Europe are now valued at 10,1x EV/EBITDA, according to the Argos Mid-Market M&A Index, which corresponds to a premium of 17 percent compared to the listed companies in the Infront Eurozone Small Cap Valuation Index. Since calculation of the Argos index is based on transactions, a premium would be expected but it has not always been the case. A year ago, valuation was on par. 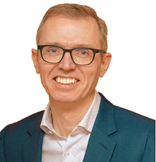 Why do you think that unlisted companies were able to resist the turbulence on the stock markets so well last fall?

"The valuations of these assets increased during the fourth quarter 2018 at the same time as stock prices and valuations fell sharply. This is not an exact science but I believe that the tumble on the stock markets that we see from now and then does not spill over onto the private market because those companies simply avoid to take in new capital when the financial markets are nervous.

Has the sell pressure not increased when the prices have gone up?

"Unless you are a 'stressed seller', and there aren't many of those right now, why sell? You'd probably wait. The stock market is much more high-strung and short-sighted than the market for unlisted companies, which has more of a longterm take."

"The valuations on the private market have been jacked up. Many listed companies have a number of takeover candidates that they still end up not buying only because the prices, and expectations, are too high ".

Why have the valuation of unlisted companies increased so much, in your opinion?

"To start with, we have negative interest rates. Let’s say you find a company with a growth rate of 10 percent that you have to pay a multiple of 20x for. After 7 years that multiple falls to 10x and after 12 years you've got your money back. The alternative is to sit on cash that costs money. Also, some acquisitions that are strategic can be justified even if the price seems high. One example of that is Cinnober, which had weak profitability but gave a great return now that Nasdaq after buying the company can use its technology."