Market fragmentation has become an important topic in the European trading landscape since the Markets in Financial Instruments Directive went into effect in November 2007. Since then, there has been an exponential growth in the number of new trading venues, and an increasing interest in tracking on a real-time basis the fragmentation of the market.

The need for tracking the market fragmentation has been widely filled by the introduction of the Fidessa's Fragmentation Index (FFI), which is the commercial name for the inverse of the Herfindhal-Hirschman index (HHI). Since then, the sell-side has been using the index to understand on which markets and securities it is worth to spend resources in smart order routing technology. As such, if the fragmentation is low, they will route their orders via inexpensive direct-market access, whereas if it is high, they will prefer to route the orders via more expensive brokers with a sophisticated smart routing technology. For the buy-side, the difference is not trivial as such decisions have a big impact on their revenue, however the inverse of the HHI lacks the responsiveness they need in increasingly fast-paced and complex markets.

From the buy-side point of view, it is clear that the current measure is ill suited for real-time decision making. The HHI aims to measure market concentration and, by construction, neglects small trading venues until they are sizable enough to move upwards or downwards the index. This leads not only to a misrepresentation of the true dynamics of the fragmentation in the market, but also it fails to capture clusters of trading activity that signal new sources of liquidity. In other words, it is too slow to be a trustworthy measure of fragmentation in today’s high-frequency data-driven markets and fails serve its principal objective, which is signaling new sources of liquidity that one should pay attention to, being this crucial in the smart routing algorithms arena.

We therefore propose an index that departs from the recognition of all possible venues where the trading of an instrument takes place, and measures the efficiency at which the market participants use all available channels to route their orders. This approach makes sense from the economic and current regulations point of view since it departs from perfect competition. By construction “it reserves a seat for the potential liquidity”, and therefore it quickly captures available liquidity in alternative venues and delivers a trustworthy representation of the current state of fragmentation in the market for real-time decision making.

The inverse of the Herfindhal-Hirschman Index

The HHI is a standard index used in analyzing the degree of market concentration of a particular industry in a specific market. As such, it is an elegant function that utilizes as input the percentage share of each firm, making it a valid candidate to measure market fragmentation since the antitrust gauging techniques possess the same principles. Interestingly, its most relevant attribute, is the interpretation the inverse of the HHI offers. Therefore, one can simply understand its inverse as the effective number of firms competing in a certain industry. More specifically in our domain, it measures the average number of venues one should trade-in to achieve the best execution when completing an order.

Formally, it is defined as the inverse of the sum of squares of the market shares of each individual trading venue:

M is the market share of each venue calculated based on volume traded at a time interval of length T-t, that has to be strictly bigger than 1% to be included in the index,

Intuitively, for a stock trading at N venues, where N is equal to the number of MTFs plus the primary exchange, an index of 1 would indicate a full concentration of the trading in the primary, while an index of N would imply perfect competition (equal market shares) among competing venues.

The inverse of the HHI, although it has been an effective tool since the introduction of the MiFID rules in 2007, falls behind in today's markets because two crucial aspects. Firstly, it has a bias towards the primary exchange since it attributes more weight to the influence of the volume traded at the primary - which in general possess the biggest market share-, thus neglecting changes in liquidity supply at the MTFs. And, secondly, it fails to capture on a real-time basis changes on the distribution of the liquidity supply, since it ignores smaller market shares until they are sizable enough to modify the weight of the primary. As such, as far as the primary remain with the same market share, the HHI does not change accordingly to represent the changes on liquidity supply and demand in the trading landscape at a given point in time of the trading day.

Moreover, from the graphical analysis and predicting models point of view, the FFI behaves smoothly making it unsuitable for real-time charting and modeling. Let us consider the following three-period stylized example where the primary and three MTFs are actively trading a certain asset.

As we can observe, in all cases there is a dominance of the primary exchange. In t =1, the index indicates that one should look at two venues to achieve the best execution in terms of liquidity. However, looking at the market shares one could safely confirm that the execution of the trade should be done utilizing all sources of liquidity. In this scenario, it is clear that due to the concentration in the primary, the index is neglecting the alternative venues. On the other hand, at t =3 , the index describes more accurately the state of the fragmentation, as both MTF 1 and MTF 2 display a sizable enough market share to be good sources of liquidity. Moreover, from t = 2 to t = 3, MTF 2 has increased twice its market share, however the index misrepresent this changes in volume by increasing the market concentration in t = 3 relative to t = 2. This bias towards the primary can lead to hundreds of market share combinations that would share the same index even though, when looking closely, the conclusions regarding whether one should use expensive and sophisticated brokers or a cheaper direct-access market would be significantly different.

Until now we have seen the weaknesses that current methodologies for market fragmentation have with a special focus on buy-side, which is our main concern. In this section we propose a new fragmentation index that departs from the recognition of all possible venues where the trading of an instrument takes place, and measures the efficiency at which the market participants use all available channels to route their orders.

By construction, the HHI is intended to measure the level of concentration in a given market, hence it stresses the market share of the primary. As such, it often yield misleading results where it signals the need to use smart order routing technologies when one could actually use direct-market access, decision that will have an impact on the bottom-line of buy-side firms. Consequently, one can correctly affirm that the HHI is a good measure of market concentration rather than fragmentation, since it does not measure the dispersion of the overall volume, but rather departures from a monopolistic market place. Consequently, our approach relies on the concept of entropic efficiency to build a MiFID-consistent index that also quickly signals changes in the fragmentation for the trading of an instrument in real-time tracking.

The traded volume for a given time interval and instrument, can achieve a sizable number of possible configurations in terms of attributable market share per venue. Although the primary exchange holds the monopoly of the pre- and after-hours trading, during the open market hours the share distribution can be well regarded as random - with exception of the first and last 30 minutes of trading-. As such, the concept of entropy suits well to our purpose as it measure the level of disorder in a given system. Furthermore, the ratio of the disorder of the system and the maximum achievable dispersion will give as a good estimate regarding the efficiency at which the order flow is using all available channels.

Our proposed index is based on Shannon (1948) entropic efficiency and Arnold (2011), however these methodologies have been modified in order to yield an intuitive and already known result similar to the one proposed by the inverse of the HHI. Analogously, when the market share is fully concentrated in the primary exchange, the index yields 1; and, if the market share is equally distributed among all available venues, it will be strictly equal to N, where N is the number of MTFs plus the primary. As a result, both FFI and our index express an approximation of the number of venues on which one should participate in order to obtain the highest liquidity and the lowest price impact.

Therefore, our index, Infront Fragmentation Index (IFI), is the state of perfect competition minus the proportional inefficiency (the departure from an equal distribution):

There are clear benefits on using Shannon's entropy for calculating the market fragmentation in comparison with the inverse of the HHI. Firstly, entropy emphasizes the weight attributed to smaller venues when shaping the overall index. As such, changes in liquidity on MTFs will be captured by the index, thus the above mentioned HHI inconsistency where two scenarios share the same index but in one case one would end up taking the wrong decision is avoided. Secondly, we start from perfect competition, i.e. N number of venues, which is consistent with current regulation and allows a linear comparison across venues. Thirdly, its construction is well suited for execution management systems as its graphical analysis provide a more aggressive reaction to changes in the distribution of the order flow with respect to FFI.

We can then formalize our index as: 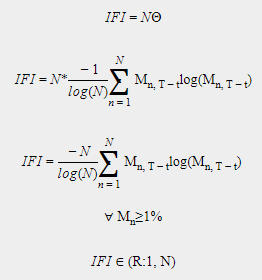 For high levels of market concentrations where the log of the numerator is equal to one, we bound the function from below:

We therefore compare the two indices with the stylized three-period example used in the previous subsection:

As we can observe, our efficiency-based index better reflects the reality of the market fragmentation, signaling the availability of liquidity in alternative venues. Moreover, as it does not contain a bias towards the primary exchange, it captures the cluster of trading activity at t = 3 in MTF 2, acknowledging a new source of liquidity which overall increases the level of market fragmentation.

The Infront Fragmentation Index, Herfindhal-Hirschman Index, and other tools for market microstructure analysis are available in the Infront Professional terminal. Try it here. 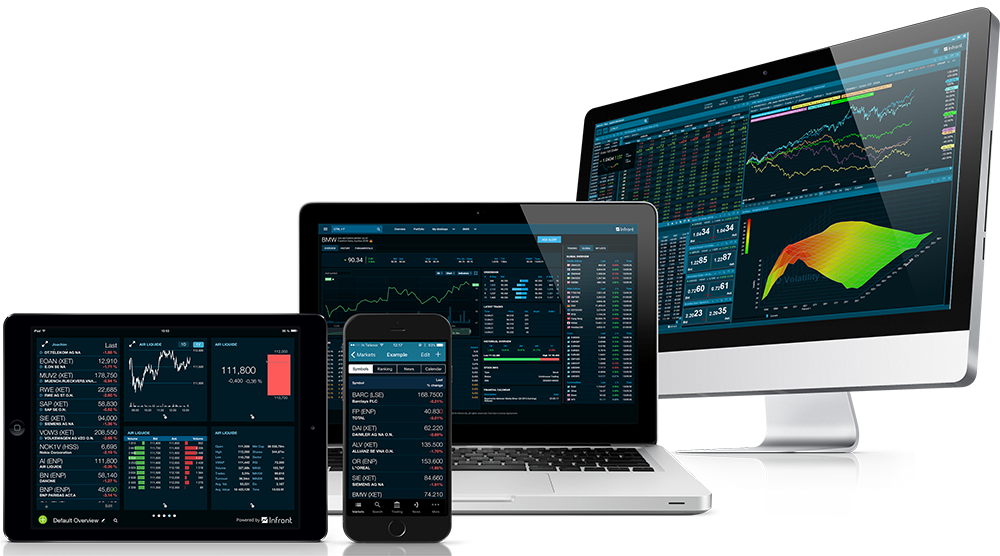 All over the world, thousands of financial professionals benefit from using Infront. Sign up for a free trial today, and discover why!